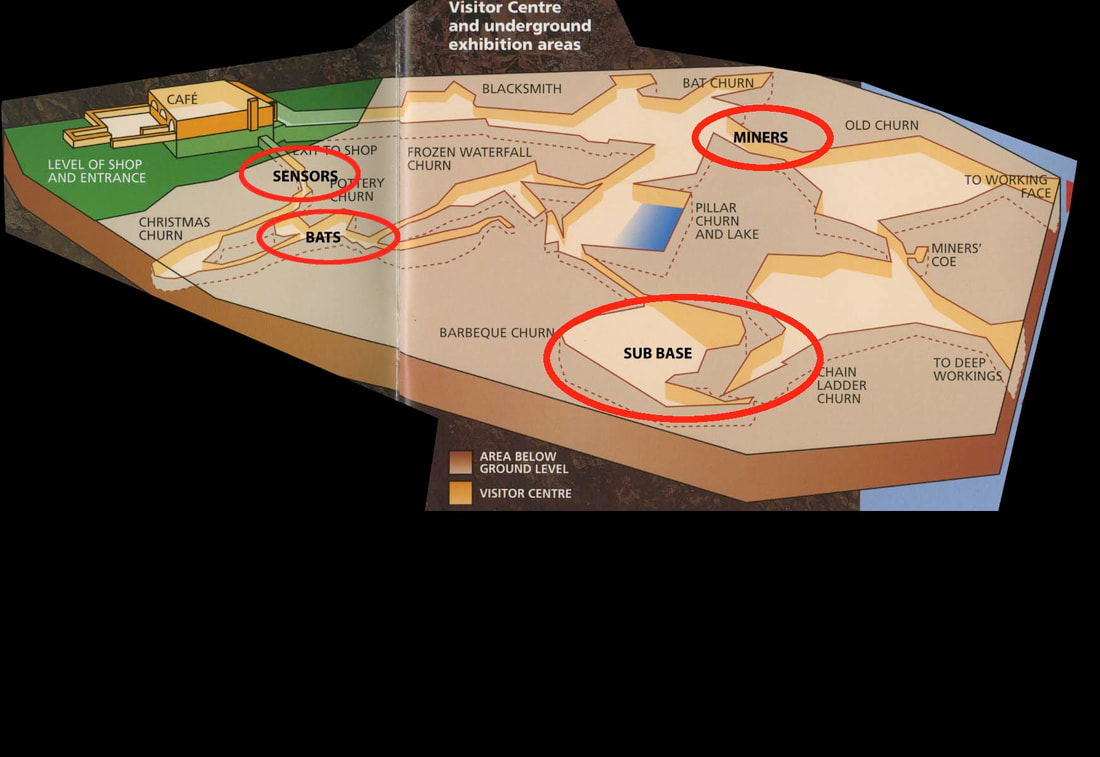 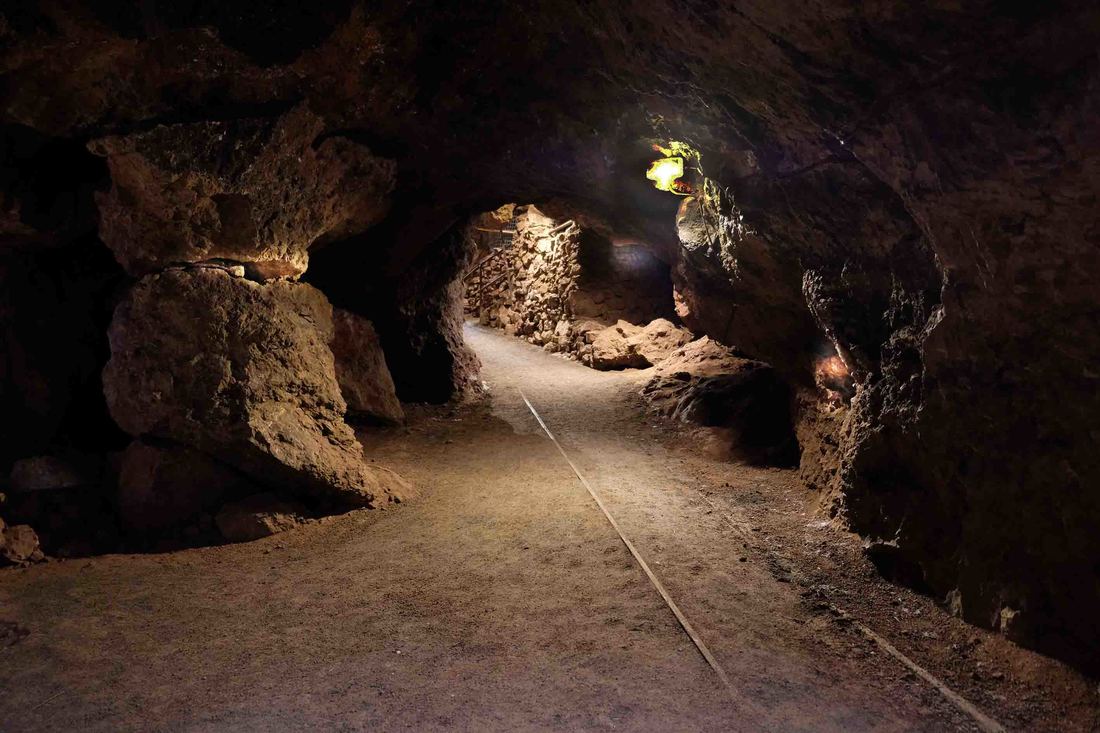 The Miners is an audio installation using primary sourced archived speech made in the 1980s by Jonathan Wright from men who worked in the mines and their relatives and partners. Comprising 5 speakers set approximately 10 m apart, content in the form of 20 sec. extracts would come from each speaker in turn. At a certain point the visitors would trigger the installation. The visitors would then would the speakers in turn and be amongst a conversation.
​Click on the file below to hear sounds. 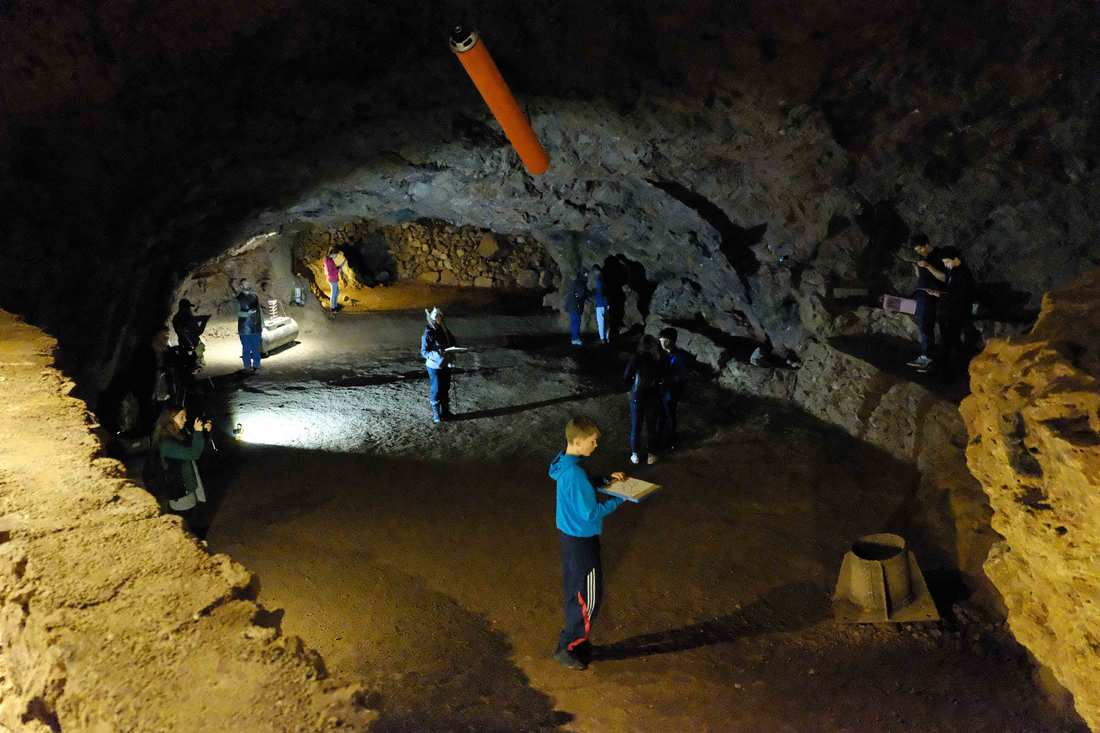 This installation is to demonstrates how sound reverberates within space by bouncing off the surface.
The participant enters the space, which is the largest chamber in the cave system. Above them is a large tube with a speaker attached at one end. This is a “sub base"  emitter at creates a sound at a single frequency. It is a bit like an organ pipe in that its length amplifies the the sound made by the speaker.
The visitor presses a button and the sub-base produces a sound. As the visitor moves around the space it appears as though the sound gets louder and softer depending on where you are. This is because the sound bounces off the cave walls, and because it is a wave, it sometimes cancelles itself out and sometimes reinforces itself. A bit like intersecting ripples in water. At certain points  “standing waves”. are created
which we hear as loud  or quiet areas.

​This installation tries to replicate what a cave may sound like if you were in a place inhabited by bats that listen to. Bats communicate at a higher frequency than people can hear so. The audio content has been changed by lowering the frequency to our audible range. The installation itself is in a part of the cave that was until recently used by bats to over winter. And comprises 5 linked speakers placed around the spaces that emit audio content that gives the illusion of bats flying around. The sounds they emit are surprisingly varied and demonstrate inter-bat communication, echo location, prey location and a repetitive sound short sound that assumed to a be a beacon sound showing other bats its location.
The content is from primary sourced recording from the Forest of Dean. They are mostly Lesser Horseshoe, Pipistrelle and the occasional Greater Horseshoe.

This area comprises devices that work a little like car reversing sensors, as you approach them they emit a pulse of sound sound, the closer you get the more frequent the pulse is. In this way the participant navigates a space by listening to sounds.  Although this isn’t exactly the way Bats use echo, location (they can gauge distancse by hearing how long it takes for a sound to bounce back to them) it works well for humans.
The installation is located in semi darkness. People are encouraged to navigate the space with their eyes closed. Navigating a space without any visual clues interesting way of experiencing the world, as a bat might without the use of vision.

​Below film of the sensors being made and in action