An immersive, art installation using audio-focused sound, primarily made by and for people with Profound and Multiple Learning Disabilities

​Since 2011, I have been working on a series of site specific Installations, investigating our perception of sound relative to vision; - the relationship between what is heard versus what is seen.

The installation comprises a series of acoustic mirrors (smooth dished surfaces) with speakers positioned in front of them, arranged in the space so as to create a soundscape through which the audience navigates and explores, the sound “sculpted” and focussed by the acoustic mirrors to “sweetspots” marked by red dots on the floor.

These indicate where you might hear the reflected sound best (but you also find your own as these points vary according to a persons size, height, hearing and the amount of people present in the space). So, one experiences a series of sound pockets with changes of volume and tone, varying in complexity according to the position one is in, overlaid with sounds emanating from other places in the vicinity, or leaking in from outside.

The Mirrors are painted bright, saturated colours to give the observer a pleasurable visual experience, without any associations or reference to the sounds they are hearing, to concentrate on sound or luxuriate in the pure colour. The forms are also enhanced by strong, theatrical lighting which creates interesting shadows as people pass through the space, - another way of people interacting with the work.

The “soundtracks” participants hear are recordings and narratives “harvested” from the localities the installation has travelled to and each sound mirror has a different arrangement of sounds on a loop to identify, including birds, bells, singing, walking on pebbles, trains, cars, rain etc.

House of Mirrors Sensory Experience developed from my installation at the Mission Gallery South Wales.  This show was very near Ysgol Crug Glas a school for people with profound and multiple learning difficulties (PMLD)  My show there  proved very popular with the students from there. In fact they visited the installation regularly often, sometimes twice a week. The student’s responses ranged from touching and moving the objects as well as making sound and reacting to the sounds and colours. It turned out to be an excellent environment for the “stop and listen reaction” process. The installation also complimented other aspects of the sensory curriculum that the school uses, and is another way to help with the students’ communication skills.  This show along with the others made me become increasingly fascinated by the effects that sound mirrors produced. At the same time Ysgol Crug Glas suggested that I take the installation to Special needs schools as most students vary rarely have the opportunity to engage with contemporary art as arranging transport and facilities can be very complex.

Developing the idea
The Arts Council England encouraged me to apply for further funding to take the installation into schools for the disabled, enabling those who are not easily mobile, to experience it. I  received the funding which enabled me to tour the show around ​
Initially I ran a pilot project in Ysgol Crug Glas, to see how effective the project was in a non gallery environment and evaluated the results with the School and CEDA a. The outcome needed to be a robust and easily transportable “kit” which would include four disc reflectors, a cylinder reflector, and radio controlled powered speakers. We settled on a Sonos system so that the whole installation can be operated from one Ipad.

A second pilot at CEDA demonstrated the importance of running workshops using found or generating /recording familiar sounds. We also realised that using a whole range of equipment wired together required training, too a long time to set up and the wires caused problems. We also realised that the more reflectors the more effective the installation was encouraging movement between one zone and another and giving and allowing a basic version of "placed sound" to be generated which appealed particularly to those with visual or depth perception issues. see CEDA short report page for details

With Arts Council and supporting funding in place we ran the project to 10 schools culminating  at the Engine Shed Bristol as part of Bristol Open Doors Week 2018. The  final venue giving the general public a chance to see hear the audio installations made by the schools

When installed a series of soundtracks that are used to create pathways through the show. Made with the students, each soundtrack reflects what appeals to the student. This was done by trained Drake Music Musicians.  Once the system is in place the resident staff seem to use it too.

The project is at each venue over a period of a month with the Drake Music Practitioners coming in once a week. Each venue makes up to five sound collages over this period that can be presented in its final week.

The results were that I decided to engage experienced practitioners through the involvement of Drake Music who partnered the project employing Alex Lupo and Luke Turner who structured and ran the workshops. We adapted a domestic "Sonos" system allowing individual channels of sound to be easily streamed through the five (the maximum I could afford) reflectors and as it operated through an iPad. This made it far easy for the participants to use and develop independently.

​How it can also be used use in other schools
Other schools main stream schools have also expressed interest as the reflectors can be used as an imaginative way describe concepts in physics, (wave motion, sound frequencies reflections), CDT through the process the process of making a project that the school itself could undertake. 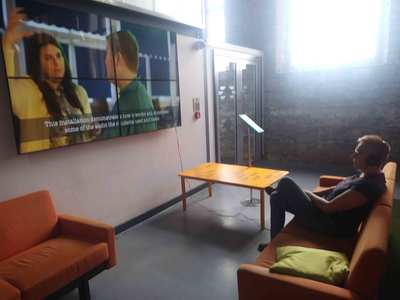 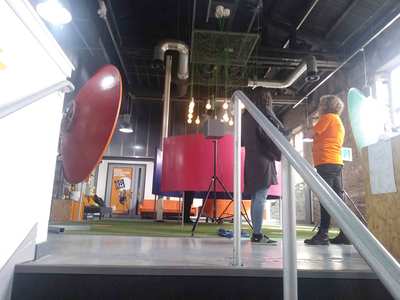 Although the tour in general was very successful, feedback clearly highlighted that some of the students showed signs of genuine progression through their interaction with the work. The four week slot each school was allocated only gave a glimpse of the possibilities. Based on these findings, I decided to explore it further by running the project at one location for a year. My aim was to see if I could focus on developing HMSE to have long term beneficial effects and be more integrated into the individual participants IEP.

To advise on the sessions and data collection I will be working with help of the following  who will advise in stages as the project advances. They are Dr Omar Yousaf, Senior Lecturer in Psychology and Music and Rachel Adams, the director of Wyldwood Arts.
​
As schools don’t have available space and it is difficult to transport SEN students, I have been advised that it would be best to house the project in a temporary structure. This would be within the school grounds, accessible for the staff to use the HMSE equipment but to remain consistent and uncluttered throughout the project.

The Department of Architecture at the University of the West of England are keen to integrate designing and managing this as part of their MA Master of Architecture Live Project. We are hoping to design it to be “flat packed” so that it could be moved to other venues in the future.  Making temporary structures also fits in well with this particular course as there is an ever-increasing demand to quick build in many places ranging from their use in events, to house the homeless including refugees. 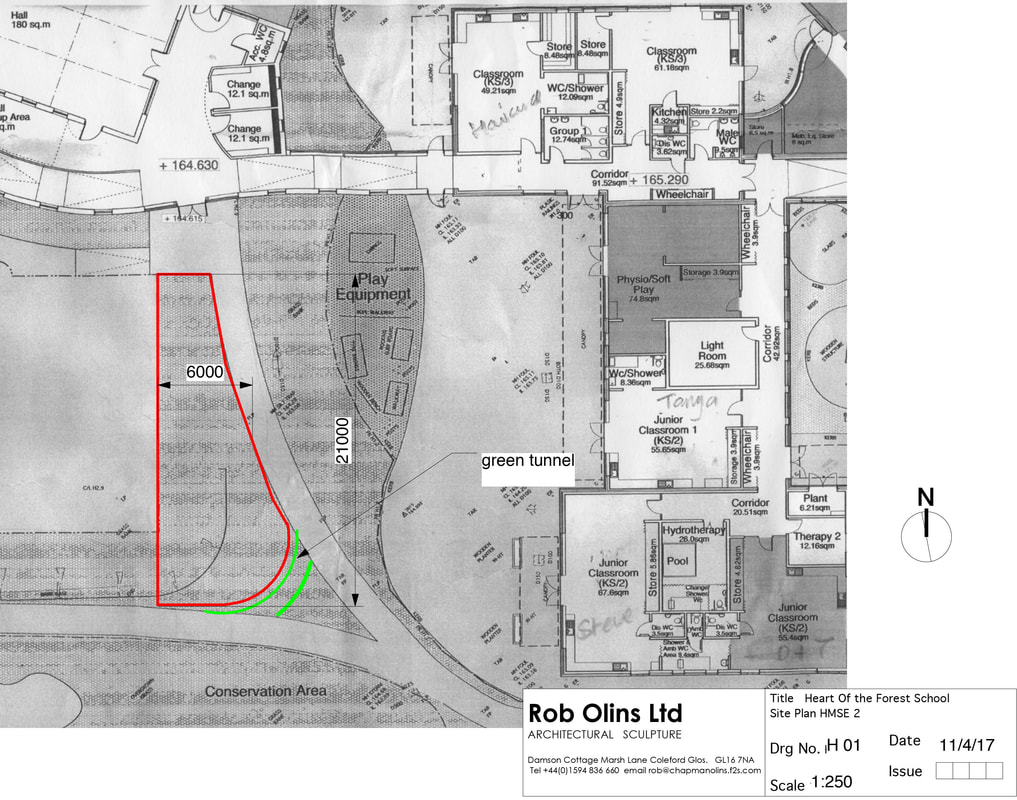 The structure to be made off site at Knowle West Media Centre, a  reskilling charity thus engaging more people and introducing them them to special needs issues. The project would be documented and filmed by filmmaker Cam Adams so that the story can be presented to a wide audience.

Coinciding with this, a paper will be published in collaboration with Bath Spa and Falmouth Universities. The film and the paper will be launched in 2020 .

An initial idea for the Temporary Structure

Below show the Multi Wedge component design of the structure making it flexible to suit the space. 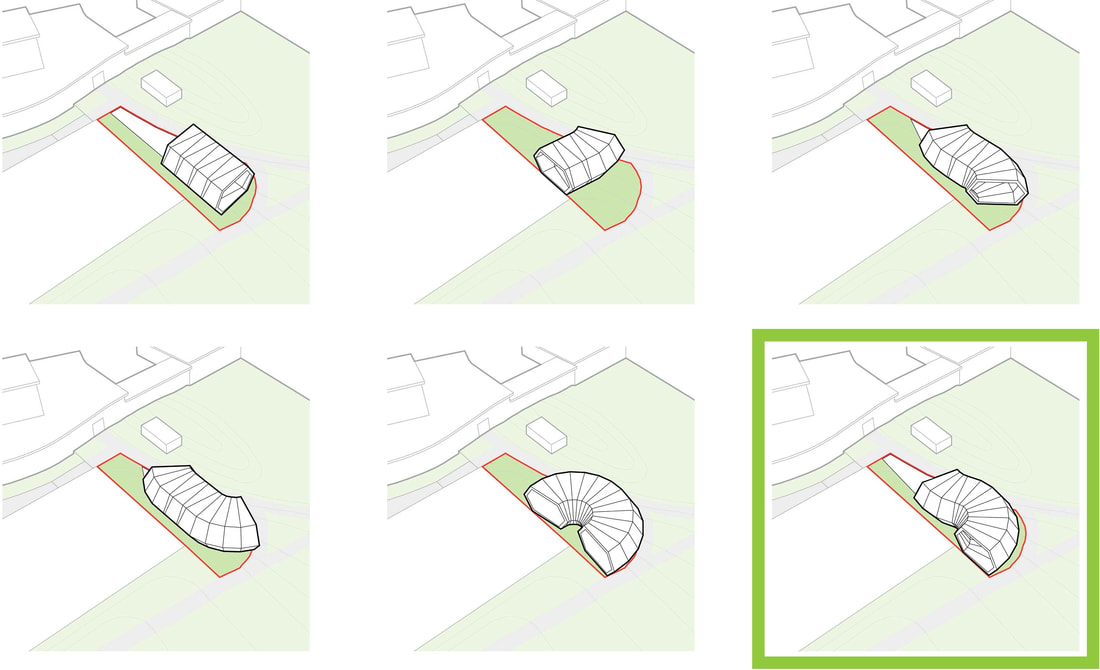 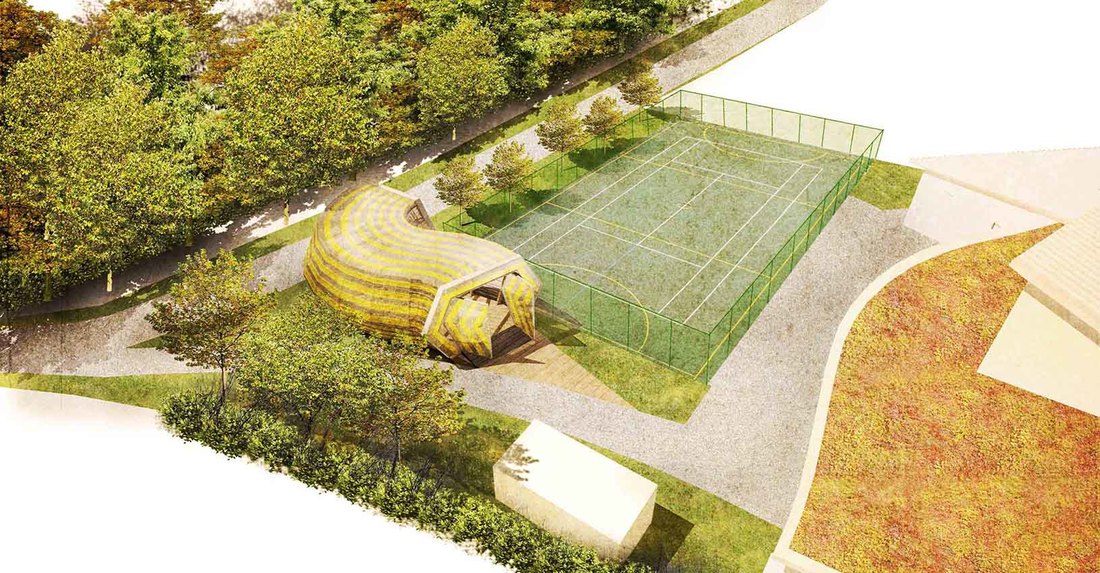 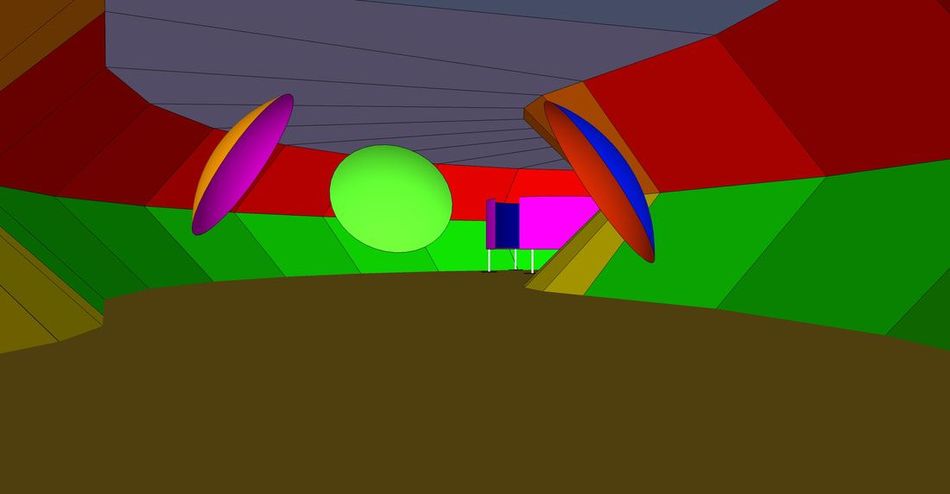