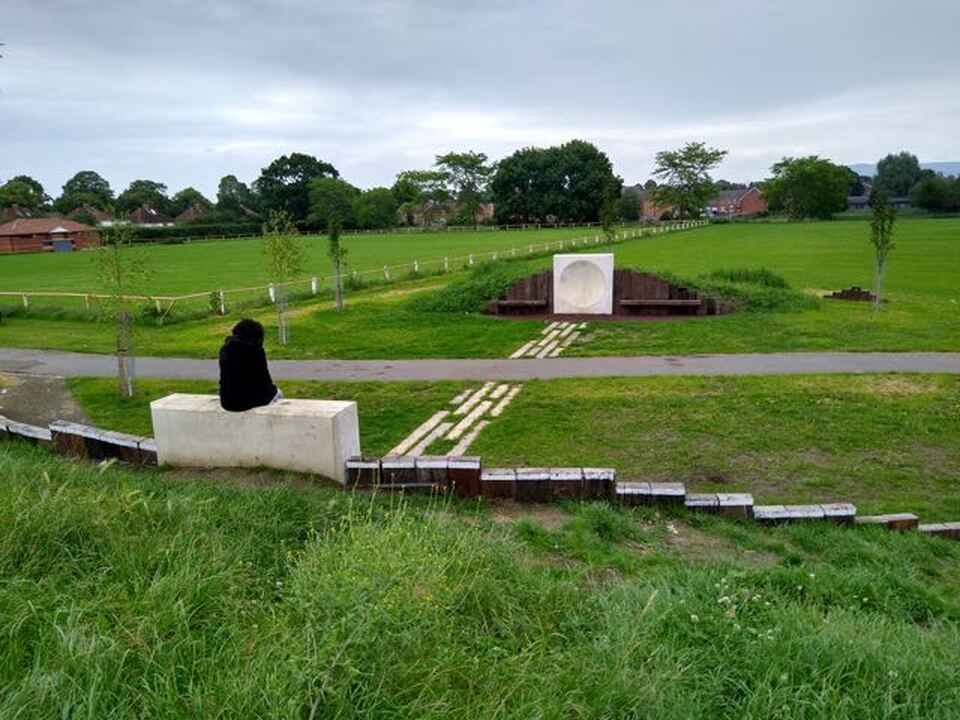 Sound Mirrors can focus sounds that come from a long way away making the volume unusually loud at one point. See if you find a spot where this happens? You will need two people one to speak and one to listen. It is best if you do this one meter from the ground.

Sound mirrors were part of one of the first projects for the nearby GCHQ which was to track enemy aircraft, in those days mainly airships, that were attacking the East coast of Britain during the first world war. The sound mirrors were a forerunner of radar, using sound waves rather than radio waves. They were know as “Listening Ears”

​With thanks to the ideas and help from the residents of Hesters Way and Hersters way Partnership
​Further Information
This project was directed by a collaborative, sustainable approach. As mentioned above it involved extensive work with local
authority officers and community groups to design a protected seating zone and interactive artwork in King George V Park.
The 20 acre park, was laid out in the early c.20th mainly for sports activities (rugby and football), with little provision for non sport activities. In partnership with the community at Rowanfield Junior School, Hesters Way Community Resource Centre and the Easter Eggstravaganza event at St Marks community centre (all within a stone’s throw of the site), a design evolved to accommodate the community’s needs - ideas generated at events consultation directly influenced the design of the installation. The consultation exposed a ‘wish list’ of interventions that residents would like, which ranged from access to a wildlife area to simply wanting somewhere to sit out of the wind. Rob worked with residents and stakeholders to come up with a design that would include as many as possible of the community’s expressed wishes, that were possible within the budget.
Volunteers planted 25 trees and hundreds of wildflowers in the King George V Playing Field. The planting took place adjacent to Rob’s new
public art installation - ‘Listening Dragon’ - enhancing the area as a friendly, attractive gathering space at the heart of the park. The design
comprises three low hills containing two ‘sound mirrors’ facing each other, creating a simple interactive and intriguing, audio experience.
Rob’s installation encourages active play as the low hills are used for off-road cycling, as well as vantage points to look at the activities taking places on the adjacent football pitches.
The Sound Mirrors are designed to be accessible to disability groups - particularly wheelchair users and the visually impaired. The seating
adjacent to the mirrors is sheltered yet has unrestricted views of the surroundings. The native flora and fauna planted, broadens local
biodiversity and adds to the sensory experience of the installation. The project outcomes are sustainable and popular with local people, who are also involved in the ongoing care and maintenance of the installation.
Since its installation, park usage has increased, drawing in previously under-represented user groups who can enjoy the seclusion of the
seating and wonderful views. The design was also informed by Rob’s wish to retain a low carbon footprint. Most of the materials are recycled or re-purposed. The seating and retaining walls are from old timber Jarrah railway sleepers and some of the paths are from upside-down old donated concrete railway sleepers. Other paths and soft surfaces are constructed as a matrix of reconstituted waste plastic granules. The Sound Mirrors themselves are from a new reduced cement based and low density (and therefore, less carbon intensive), concrete mix - a prototype product, which is being developed by the University of Bath’s BRE Centre for Innovative Construction Materials.